[15 Sep] The Space Industry: present, future and opportunities for graduates 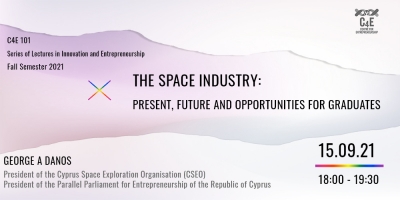 In the near future space is set to be the next big industrial revolution. It will be an enabler in driving environmental sustainability, advances in healthcare, enhance research and industrial capabilities, satellite telecommunication and space system engineering,innovationinmanufacturing, telecommunications,connectivity, International collaboration, knowledge sharing and more. What are the next big goals of humanity in the space frontier? Is there a role for our country in these? Can our graduates be the next scientists and engineers that will see through some of these achievements? What professions are the most relevant within the horizontal spectrum of activities in the upcoming privatisation of space endeavours and growing space industry? And finally, what is the role of our own domestic space research organisation in the grand scheme of things in space exploration.
The Cyprus Space Exploration Organisation (CSEO) is the prime space institution of Cyprus, that promotes and advances space exploration and astronomy in Cyprus and around the world, focused on building the next generation of space scientists, participating in global space research exploration missions, while bridging international collaboration in space initiatives and technologies. CSEO disseminates programs that combine science, engineering, innovation and entrepreneurship, stimulating young engineers in creative technological innovation. More at https://www.space.org.cy

C4E 101: Series of Lectures in Innovation and Entrepreneurship – Fall 2021

He is a Recognised Eminent Alumnus, of Imperial College, London. He holds the prestigious title of Honorary Member of the International Astronomical Union (IAU), in recognition to his significant contributions to the progress of astronomy and space science. He was elected Academician of the International Academy of Astronautics (IAA), for outstanding contribution to the exploration of space.

He was Creator and Founder of Virgin BizNet, one of most lucrative business ventures of Sir Richard Branson’s Virgin Group - whilst aged 27, after pitching at the “House” of Richard Branson.

He led several societies, groups, companies and organisations in the UK and Europe in general.

He is a leading space personality of Cyprus who has dedicated his life, promoting and mentoring astronomy and space research, innovation, and entrepreneurship in Cyprus and around the world. He formulated and led space research projects, and nurtured the local space community of Cyprus, seeing notable achievements and multiple international awards, seeding the next generation of scientists that would uptake astronomy and space science as a professional career.

He chaired many international groups, panels, summits, and symposia, that facilitated international space collaboration and diplomacy. He brokered international agreements, such as the high-level international agreement (including NASA-USA and IKI-RUSSIA) to consolidate global scientific efforts relating to Mars space-missions, selecting Nicosia as permanent base for the Mars Upper Atmosphere Network (MUAN). He chaired the First Online Global Moon Village Workshop and Symposium, that facilitated international space diplomacy with the creation of the Global Experts Group on Sustainable Lunar Activities (GEGSLA), encompassing the participation of all space faring nations. As Chair of the Moon Analogues Working-Group, he brokered and announced at the 70th International Astronautical Congress (IAC) Washington-DC, the “International Moon Analogue Consortium”.