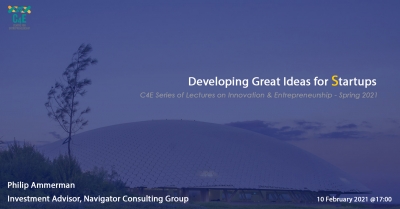 Everyone has great ideas, and many of us have more than one. But how can you evaluate your idea to understand whether it’s good enough to launch as a business?

In order to help aspiring start-up founders, we have developed a 15-step thought process to help profile, quantify and evaluate start-up ideas.

This is done prior to a full business plan, and illustrates some of the practical requirements needed to convert an idea into a business venture.

There are fifteen steps to the process. While they appear linear, many of them are heavily iterative and you may often find yourself repeating steps or re-challenging assumptions the further you move into the process.

Join Philip Ammerman at C4E Series of Lectures on Innovation & Entrepreneurship - Spring 2021 to explore this process with him!

Philip Ammerman is a consultant, entrepreneur and investment advisor who has advised start-ups, investors and enterprises on digital disruption, internationalisation and investment-led growth since 1994. He is founder of Navigator Consulting, Numenor Capital and the Centre for Innovation & Entrepreneurship.

Philip started his consultancy career in 1992. He supported the first wave of disruption in sectors such as banking and travel between 1995 and 2000, when the first dot.com crash took place. In parallel, he supported “real economy” investments, primarily in industry and manufacturing, that took place in Greece, Central & Eastern Europe and the former Soviet Union. He has advised on over 120 investment transactions with a total investment value exceeding € 6 billion. He has multi-sectoral experience in due diligence, business planning and financial modelling, in sectors including digital/tech start-ups and scale-ups, agri-food, manufacturing and hospitality.

The Web 2.0 boom continued Philip’s engagement in the tech sector, and in 2010, he founded the Navigator Entrepreneurship Charter, an initiative to support growth in Europe by investing in 10 new start-ups and spin-offs between 2010 and 2020. In this capacity, Philip acts as early stage angel investor and board member, and has co-founded or invested in 6 start-ups so far, all in the B2B online services space. He has recently been appointed as Team Coordinator for Greece by the European Bank for Reconstruction and Development (EBRD), and is supporting innovative Greek companies in the field of competitiveness and internationalisation. Projects are underway for Mastihashop, an innovative food, cosmetics and parapharmaceuticals firm based on Chios gum mastic products (mastiha), as well as for Milkplan, an innovative dairy equipment manufacturer.

Philip acts as regional portfolio manager for Brookstreet Equity Partners, a London-based private equity firm active in tech and innovation investments. Brookstreet recently announced its first investment in Greece, in the nanotechnology firm Nanophos. He is a non-executive director of Redfin Capital, an asset management firm, and is an evaluator for the European Union’s Horizon 2020 SME Instrument.

Philip studied at Princeton University and Cornell University’s School of Industrial and Labour Relations. He is also a graduate of YCombinator’s Startup School and the Oxford Fintech Programme.

Originally from Athens, Greece, Philip is a resident in Cyprus since 2016, and travels over 250 days per year. He has implemented project work in over 40 countries, and has lived and worked in Greece, Cyprus, Germany, France and the United States.